Due to work pressures, I have been unable to write my blog, so I am going to call upon the occasional guest blogger.

The first is Tilly Wherrell. She is an eight-year old bitch of indeterminate parentage, and comes from nearby Bridford. She has lived with us since she was two and I can honestly say life has never been quite the same since… 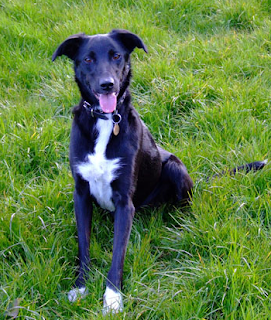 “Hiya!!!!!! How exciting is THIS!! Wow! She’s actually letting me have a go - been wanting to have a bark on the blog for ages!

Well, what can I tell you about myself? Um… well I am black with four very white paws and a white tummy - I am pretty cute!! I’m really, really fussy about my appearance and I like to look my best! I am the only dog here now, the Old One went to sleep a while ago so I get ALL the fuss, which is just great!!

I live with Her and Him. She says I am neurotic - I don’t know what this is, but as it’s got ‘new’ in it, I think that means it must be good! He says I am ‘A bloody nuisance” and always tells me to “Calm down”. I’ve no idea what either of these things mean, but he says it a lot - so I think that must be really good too!!!!!

When I get too, too excited, my teeth chatter. The old bloke that comes here, they call him The Old Git, he says my teeth “Go like castanets”. I don’t know what these are either, but it makes Him laugh so they must be really funny things. I get excited A LOT so I clack my teeth A LOT and sometimes I quiver all over - and that’s just amazing!!

What else can I tell you about me? Um… well, what about some of my likes and dislikes? I like my dinner, oh yes I do! I love the biscuits, I love the meat and I really love the yogurt!

I tell you something I don’t like - I don’t like that big black thing in the lounge that they put bits of wood in. It makes crackling noises and when they open the doors there’s all this orange stuff jumping about inside. I always go and hide in Her office when they start using that thing. I don’t really know why they do it. I mean, what’s the point? They sit in front of it and they fall asleep, so it isn’t any fun at all.

I like chasing my ball - actually I LOVE it! They have a thing they use to help them throw the ball further - and that’s really good! He throws it ever so, ever so far! Sometimes, so far that I can’t see where it lands! He’s really funny then, ’cos He jumps up and down and He makes lots of noise and often waves His arms about and points! I just love that - such fun! I run round and round to amuse Him. But even though I try my best to encourage Him, He never seems to be able to find the ball again. I think he might be a bit stupid sometimes. Funny, but stupid.

I always try to be really, really helpful, but I think sometimes I get it wrong - LOL!!! The other day we went and stood in a field and He made loads of noise with this thing called a chainsaw and cut up the trees that had fallen down. She was there picking up bits of wood and putting them in the car - how weird is that? Why would you want to put the tree in the car?! I mean, come on!! At one point, She said “Why is that stupid dog frightened of the fire, but is happy to stand next to a working chainsaw?” She is stupid. She just doesn’t understand how a dog’s mind works.

Anyway, I started helping by picking up the wood and moving it too. I was getting pretty good at it I can tell you, and I’d built up my own little pile of wood right in the middle of a nice muddy bit - then She comes over shouting and waving Her arms about (very funny!) and the next thing, She’s on the ground next to me - which was just hilarious! She called me a ‘ bloody nuisance’ which I know is a good thing to be, and rubbed Her knee where She fell down. So I gave her a really big lick, right in the eye, and then I stuck my nose in her ear! It was great! She thought so too as She jumped up really quickly and started playing and running after me!

I do like to make them happy if I can. For instance, when I get to sit next to Him on the sofa, which isn’t very often as She is usually there… I sometimes lean against him and then I stick my tongue right in His ear! This is fantastic! He has furry ears, a bit like me, and when I do it, He jumps up and goes “Urgh!” and “Argh!” and shouts things like “That’s so disgusting!!” and I love it!

I wag my tail a lot. And I mean A LOT. I am just a happy sort of girl!! They love this too, especially when they have Others in to visit. I love to go round and say “Hello” to them all, and I clack my teeth and I smile and I wag my tail and they all shriek and grab those clear things they drink out of and some of them jump up! There’s often a sort of smashing noise and they run about even more and bring cloths and start crawling around on the floor rubbing the carpet - so of course I give them a lick!! It’s just too much fun!! I am the centre of the party - LOL!!!!!

After that, I quite often find myself shut in Her office. It’s cosy and I have a bed under Her desk. That’s how I know about the Blog things as she talks about it so much. But that’s just like Her, she always talks about it, but never seems to do it. They are funny - honestly!!

Right, well it’s time for my afternoon walk now, so I’ll go and prod Him to remind him. He’s got a terrible memory you know.

Email ThisBlogThis!Share to TwitterShare to FacebookShare to Pinterest
Labels: Tilly